A Long Weekend in Iceland 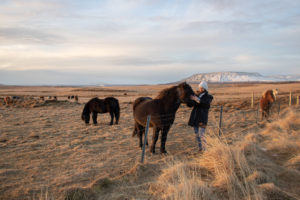 If you have been following me for a while you know that I normally travel to hot and if possible tropical countries. I am not a winter person and I never will be, as soon as the temperatures drop I go into hibernation mode and all I do is googling :” where is hot in December”. Although I know I will probably always gravitate towards hot climate my recent trip to Iceland really changed my prospective about cold countries. I am actually really looking forward to visit more north European countries and yes I will probably go again during the winter months as I really think there is such a magical atmosphere that you won’t have during the summer.

Let me start by saying that Iceland was a surprise mini break for Sam to celebrate our tenth anniversary. We left London on Friday and we came back on Monday evening. Flights from London can be really affordable, especially if you book them really in advance, something to bear in mind considering that you stay in Iceland overall probably won’t be cheap!

When we arrived at the airport we went to pick up our car (I booked it in advance) and since it was already mid afternoon we drove straight to our first hotel. Unless you are on an organised tour, having a car in Iceland is pretty much essential. It will give you the freedom to drive around and see probably the most gorgeous road sights of your life! The first night we stayed in Hella (around 1 hour and 40 minutes from Keflavik airport) at the River Hotel. The main reason why I decided to not to book all our 3 nights in Reykjavik (the capital) is because I was hoping we could see the northern lights which you are most likely to see if you are in the countryside. Sadly we didn’t see them! I know, gutted! With the northern lights is really a matter of pure luck, it’s kind of impossible to predict wether you are definitely going to see them or not. But a girl can dream, right?

Anyway the River Hotel was lovely, super clean and very very scandi style, aka very minimalistic all the way throughout. It also has an outdoor sauna and a hot tub which they can be turned on on request. Since you have to pay extra for breakfast I requested some vegan options and they were super accomodating, they even got me some vegan cheese!

We decided to do what is generally called the “Golden Circle”  which if you have your own set of wheels will probably take you 4-5 hours in total. The first stop were Gullfoss Waterfalls which are by far the most powerful and spectacular waterfalls I have ever seen in my life. In wildness and fury they are actually second to only the Niagara Falls. They were definitely breathtaking so I couldn’t not recommend more to pay them a visit. 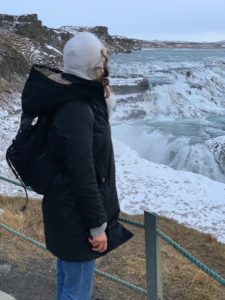 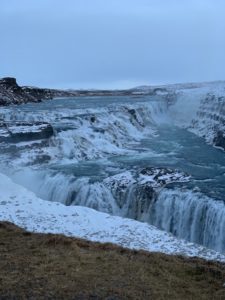 The second stop was Geysir which again if you are in Iceland you can’t miss! You only have to wait 10-15 minutes to see an eruption. It’s the biggest geysir in Iceland as well! 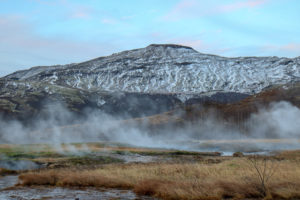 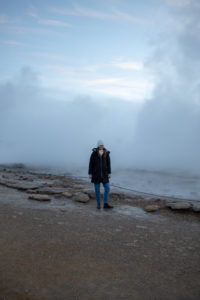 The third and the final stop of the golden circle was Pingvellir national park which was so beautiful, even more so as when we got there the sun was of a mellow shade giving the surrounding a touch of golden glow. Since it was freezing cold we didn’t stay too long, if you are not the biggest fan of walking you can just go for a 30 minutes loop and still be able to experience the beauty of the landscape. 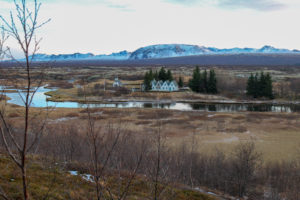 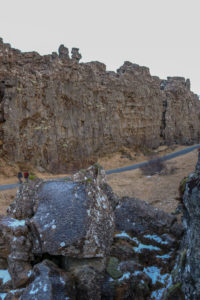 We left the national park heading to Reykjavik where we stayed for the other 2 nights. When we got there we were absolutely starving as we still haven’t had any lunch so we went to Egill Jacobsen which they are kind of brunch/lunch place with few vegan options on the menu. I had the vegan brunch plate and it was huuuge! Definitely the biggest plate of food I ever had! It had scramble tofu, baked beans, vegan cheese, avocado, hummus and sweet pancakes. Overall it was very delicious and I was seriously fulled afterwards! The other vegan option on the menu was a bean burger.

In Reykjavik we stayed at the Kvosin Downtown Hotel which is super convenient as it’s bang in the city centre and close to all the shops and restaurants. The hotel itself is divided in mini apartments  and I just love how cosy and stylish our little flat was. I would definitely recommend to stay there, although is definitely not the cheapest option. All the hotels in Iceland are quite expensive, I definitely went slightly over of what I would normally spend as it was a special occasion. Nevertheless the hotel was really beautiful, spotlessly clean, really cosy, comfiest beds and in a super convenient location.

For dinner we went to a ramen place called Ramen Momo which serves an excellent vegan ramen with amazing kimchi. I also ordered some veggie dumplings and they were delicious too. The pace is super small, only 10 seats so be ready to maybe have to wait 10-20 minutes for a seat. 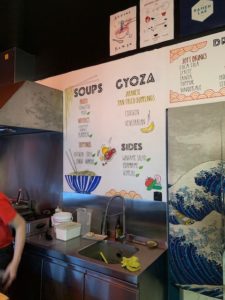 DAY 3: We decided to explore the south shore so we headed all the way to Vik, a fisherman village on the coast with dramatic black beaches and its iconic cluster of sea stacks known as Reynisdrangur which rise from the ocean like ebony towers. 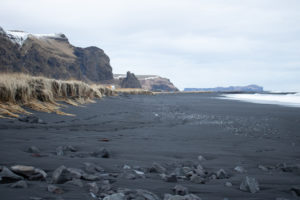 The thing that I liked the most about Iceland was definitely the landscape, I could literally drive around for hours without ever getting bored of my surroundings, from golden fields, snowy mountains, the cutest horses to waterfalls and cute as a button tiny villages, Icelandic landscape is really incomparable to anything else. The second stop was Skogafoss Waterfalls which were so majestic and so tall! Literally breathtaking, we also walked all the stairs to the top and the view was just amazing! For lunch we stopped at the small restaurant at the bottom of the waterfalls, probably not the best idea as being such a tourist spot it was quite expensive but we were starving! I had a plate of pasta pasta with tomato sauce as there weren’t any other vegan option. 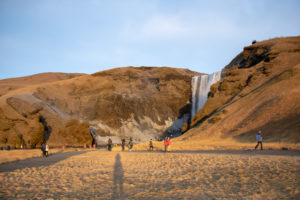 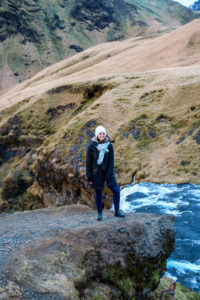 The final stop of the day was another waterfalls location, Seljandsfoss which again were breathtaking and so majestic. 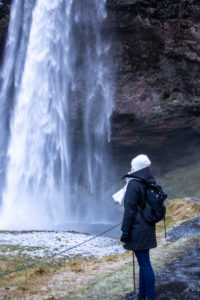 All the main attractions (like waterfalls) are clearly indicated so you really can’t miss them.

When we arrived back in Reykjavik we popped into the cat cafe –Kattakaffihúsið– for a cup of tea and a slice of cake. You can’t miss the super cute and very pink small cafe where all the baked goodies are vegan! I had a the mocha cupcake and it was utterly delicious! Plus you get to stroke 2 adorable fluffy cats, what more can a girl ask for? 😉 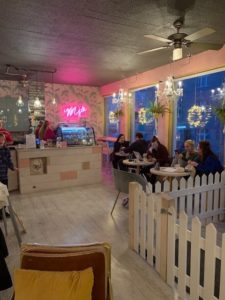 For dinner we chose asian food again, I mean how can you beat a piping hot bowl of soupy noodles when it’s freezing cold outside? This time we decided to go a Vietnamese restaurant called Pho – Laugavegur. The food was ok, I definitely wouldn’t say it was the best vegan pho I haver ever had but it filled me up and it was relatively cheap. 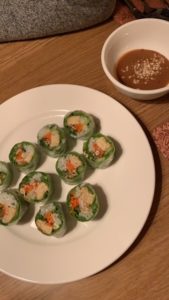 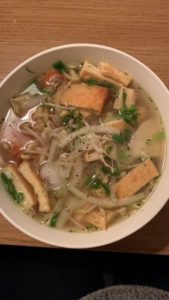 DAY 4: Since our flight back to London was at 5pm we decided to dedicate the last day to the Blue Lagoon. I guess you can’t go to Iceland without visiting the Blue Lagoon, is like going to Paris and not see the Tour Eiffel.  It’s on the way to the airport so I thought it made sense to leave it to last. Since it was our anniversary I booked the premium spa package which is definitely not cheap but I have to say it was a lovely treat and I really enjoyed every minutes.

Before we headed to the Blue Lagoon we had breakfast at Bergsson mathus which is a lovely breakfast/ brunch place just around the corner from our hotel. I love the vibes of the place and my breakfast was delicious. I had a soy cappuccino and a massive avocado toast with hummus, cucumber and tomatoes. 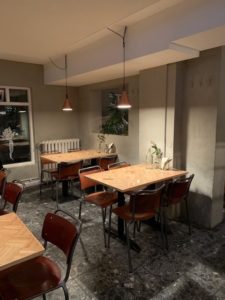 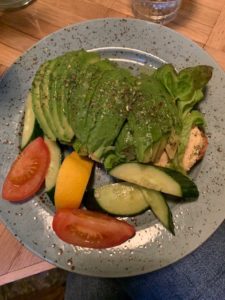 If you are planning to visit the Blue Lagoon I would recommend to buy online the tickets in advance as it can get really busy. Standard entry is around £47.In the spa package I chose you have exclusive access to the Spa facilities (although any massage or treatments needs to be booked and paid separately) and you have also a private section of the blue lagoon which is definitely less crowded. I have to admit the spa is beautiful, you have access to sauna, steam room, relaxation room and to body treatments which you can do yourself like scrub, algae face and mask and another mud mask. You also have your own very fancy private changing room. We definitely felt very blissed out after few hours there and we also decided to have lunch at the spa restaurant. To my surprise they were few vegan options on the menu and a good selection of juices and smoothies. I ordered the miso soup with tofu and hummus with seeds crackers. Again it wasn’t cheap but it was such a lovely way to end our stay in Iceland. 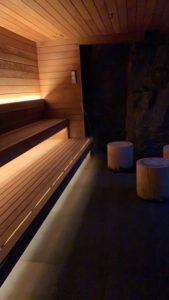 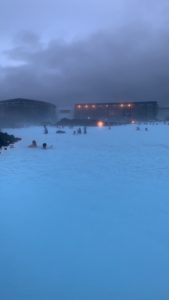 Overall I really can’t recommend to visit Iceland more! If you are a nature, wildlife fan like me this country has be on your bucket list! There is so much to see! therefore if you have the time I would probably recommend to spend at least 7 days. I wish we could have stayed longer but I am already thinking about going back during the summer time to see everything else which we didn’t have the time to see.

The only thing which sadden me about Iceland is that they are still hunting whales and sharks. And what it’s even sadder is that the majority of whale and shark meat is actually consumed by tourists. If you are visiting Iceland I beg you to think twice before consuming what it’s sold as a “local delicacy”.

On the bright side the vegan options have literally popped up everywhere! So don’t worry, you won’t have to eat potatoes for a week! In Reykjavik especially there are plenty of vegetarian or vegan friendly restaurants, I wish I could have visited more of them! To easily find them I always use the app Happycow which list all the vegan/vegetarian restaurants around you wherever you are in the world.

A final eco friendly note, Icelandic water is by far the cleanest water you will ever drink (it will probably be straight from a glacier) so please pleased don’t buy plastic bottle water! I promise tap water has never tasted so good! I had my 2 reusable bottles with me and we just refill them at any restaurants or bars which seems to be super common!