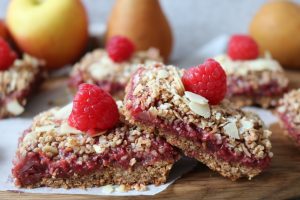 Summer is by far my favourite season. Not just because of warm and longer days but also because of the abundance of juicy and sweet seasonal fruit. This dessert bring together 3 of my favourite summer British produce: pear, apple and raspberries into a delicious and light summer pudding. I love the contrast of textures between the crunchy base, the gooey jam and the crispy crumble. It’s great on its own but I personally love serving it with a generous dollop of coconut yogurt and some fresh berries 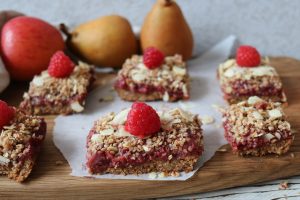 For the jam layer:

2 apples (skin on) – I have used Jazz Apples, chopped in bite size pieces

½ cup of frozen or fresh raspberries

For the crumble layer:

3/4 cup of almonds (pecans will work as well)

Start by preheating the oven at 180 degrees Celsius.

To make the base: place the oat flour, ground almond and the cinnamon into a bowl. Add the almond butter, maple syrup and coconut oil and combine together first with a spoon and then with your finger. If the dough is too dry add a dash of almond milk or water.

You should have quite a hard and a bit sticky dough. Transfer the mixture into a brownies baking tin covered with parchment paper, With your fingers press down the mixture until is evenly spread across the tin. With a fork makes few holes in the dough so it will not puff up during the baking.

Place it in the oven and bake for 20 minutes until it goes slightly golden around the edges.

While the base bakes make the jam filling: in a sauce pan place the chopped apples and pear with a splash of water, cook it gently for 5 minutes. At this point add the raspberries, vanilla essence, chia seeds and coconut sugar. Cook the jam on a low heat for another 10 minute. The chia seeds will help to thicken it up.

Remove the baking tin from the oven and leave it on one side to cool down.

To make the crumble topping: place the nuts, oats and coconut in a food processor and pulse it for few seconds. Don’t over process it, you still want to have a chunky texture. Remove the mixture from the food processor and place it into a bowl. Add the melted coconut oil, cinnamon powder and maple syrup and mix it well until everything is all coated in the maple and coconut mixture.

Spread evenly the  jam onto the baked base then top it with the nutty crumble making sure all the surface is covered. If using sprinkle the flaked almond on top and bake in the oven for a further 15 minutes. You don’t want to over baked it as the jam will dry out too much, just baked it until the top crumble start to become golden brown around the edges.

Once out of the oven leave it in the tin to cool down completely otherwise it will be likely to fall apart. Slice it into squares and enjoy!